REPSOL “in contempt of court”

On January 1 of this year, a major oil spill occurred in the Yasuní UNESCO World Biosphere Reserve as part of the workings of Spanish oil giant REPSOL. REPSOL is working in the oil fields of concessionary Block 16, which happens to overlap Huaorani ancestral territory.

Even though several months have passed since the spill was detected, and despite the severity of the event and the insistent pleas of the Huaorani community Dícaro that the company may undertake the necessary clean up and remediation, no action has been taken by REPSOL.

16th of February 2008: The Huaorani community presents a complaint to the local Human Rights Council of Orellana (an Amazonian province of Ecuador) asking for the immediate intervention of this authority.

14th of April 2008: The Human Rights Council of Orellana summons the parties (REPSOL YPF and the community Dícaro) for a Public Mediation Audience that is later suspended upon discovery that the lawyer representing the company was not accredited for this function.

21st of April 2008: A second Public Mediation Audience is convened at which no representative of REPSOL appears.

28th of April 2008: A third Public Mediation Audience is convened, at which the once again absent REPSOL representatives are being declared in contempt of court by Dr. Vinicio Jiménez, Human Rights Commissioner of Orellana.

The Huaorani community Dícaro and the human rights and environmental organizations of Orellana demand the immediate remediation and the adoption of all the means necessary to be able to recuperate and decontaminate the affected and surrounding zone. Moreover they demand full compensation and redress for the harm caused. 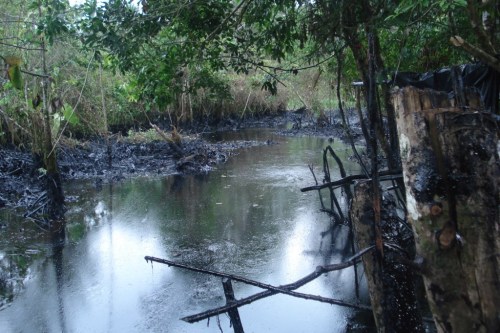 In the meantime (late March), president Correa met with REPSOL head Antonio Brufau in Quito, where they “expressed their wish that the ongoing talks to renegotiate oil contracts can be successfully concluded over the coming weeks”.

All information in this post is from the press releases of the independent Press Committee of Orellana, which also states: “the oil companies have never before been so at ease and protected by the armed forces as under Correa” – “Anyone protesting is put in prison and called a terrorist”.

The formal complaint is signed by: