In the night of November 30 – December 1, over 50 people (including 3 minors), mainly from the community of Dayuma near Coca in the Northern Amazon region of Ecuador, were violently arrested by the military acting on orders of President Rafael Correa who pronounced a State of Emergency in the Amazonian Province of Orellana (Decree 770) due to protests in the oil producing province for improving road infrastructure and basic services and against feared quasi-privatisation of the state-owned oil company PETROECUADOR. 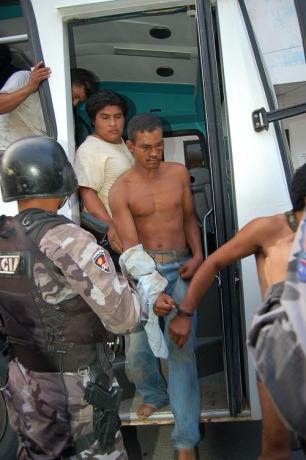 During the raid of Dayuma, men and women were beaten, homes entered by members of the armed forces and money, food and mobile phones stolen. Many children fled on their own into the forest. One man was admitted to hospital in a dangerous condition due to the beatings he received. An elderly human rights activist was threatened with being arrested as terrorist for taking pictures and “then who knows what will happen to you”. The great majority of detainees were still unreleased a couple of days ago, having been moved to a prison in the city of Tena, despite the request to release them by Ana Rivas, mayor of Coca, via an appeal to Habeas Corpus. 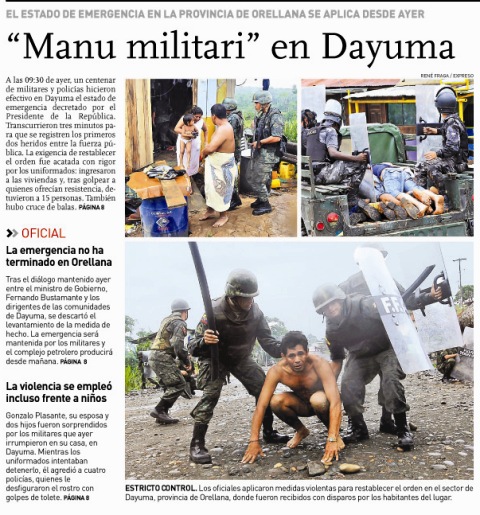 The villagers in protest were said to have left their homes after 10 pm, the time curfew begins under Decree 770.

The Interamerican Court of Human Rights recommended in 1999 that Ecuador do not declare State of Emergencies to combat social and economic problems or delinquency (IACHR, annual report 1999, chapter 4 on Ecuador).

(Information from the press release of the Human Rights Committee Orellana, Dec 3.)

Please read also our other posts on state of exceptions.

One thought on “Repression in Orellana”

It’s a shame! The real face of Correa’s socialdemocracy, of southamerican road to “socialism” when popular struggles concerns neoliberal goals and their connection with multinational interests.